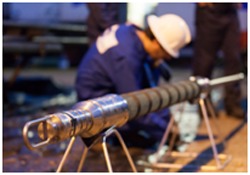 The high R&D Company profile, the innovation and the creative use of technology brought a new and simple solution for Expandable applications. The first Field Test operations were carried out for PDO in Oman in 2008, to isolate a zone of open hole and successfully cure total losses while drilling.

In the years 2008 and 2009 the development focused on the qualification and industrialization of the process from manufacturing to the setting in the well. Inflatable Packers, Down Hole Tool, Surface Equipment, and Soft Ware have been developed and qualified firstly in the Saltel Industries test dummy well, then in real oilfield applications.

2010 saw the beginning of large-scale marketing of the SES Patches. Today, numerous meytal patches have been installed in Europe, North America, Russia, Africa and the Middle East, ranging in length from 3 to 66 m, and mainly on-shore but also offshore.